We all know that Mark Shurtleff has no clue how to use Twitter. In fact, he mistakenly announced his Senate Candidacy via twitter when he thought he was sending a text message to news reporter Ben Winslow. But that was like, a whole year ago, right? Mr. Shrutleff has certainly become more aware of how to use Twitter and now knows that whatever he tweets his more than 7k followers will read, right?

You would think. But recently Shrutleff has been spewing out more nonsense thinking he was responding to who knows who on twitter. I thought it was pretty funny when I saw it and I promptly retweeted his nonsense. Then I called him out on it in a reply via twitter. (In the interest of full disclosure: I did so privately to Mark, but later reposted to the public timeline so that everyone could see. The original was posted immediately after my retweets, the repost was a few hours later. I’ll explain more about that decision below). It was about this same time that he tried to cover up his mistakes by posting this hilarious cover up.

This is where the fun began. The Attorney General for the entire state of Utah then took it upon himself to start making fun of me via Direct Message on Twitter and calling me names. That’s about the time I decided to delete the original reply and repost it to the public timeline for all to see (mentioned above). 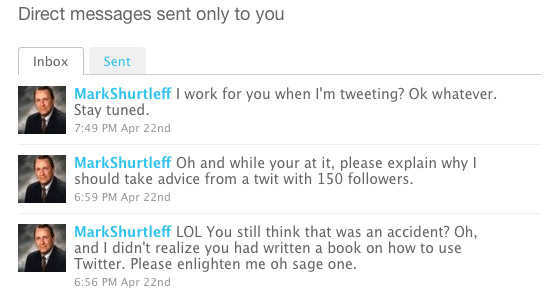 I was laughing about the incident all night. Especially the fact that he was still trying to convince anyone that he leaked his Senate hopes on purpose. In fact, I later posted how funny I thought it was that he was wasting his time arguing with me.

Now, in spite of getting a kick out of the whole thing, I will admit I was a bit nervous. How would you feel if the Attorney General threatened you with a big fat “stay tuned” and that was the last you heard from him? It turns out he did retaliate. Although it took me a good long while to figure it out (sneaky guy!). He actually BLOCKED me on Twitter. Wha…..NO! Anything but that. Now I have to actually VISIT your profile to see your tweets instead of getting them in my timeline. What a shambles.

I only have two words of advice in case the Attorney General ends up here and reads this.